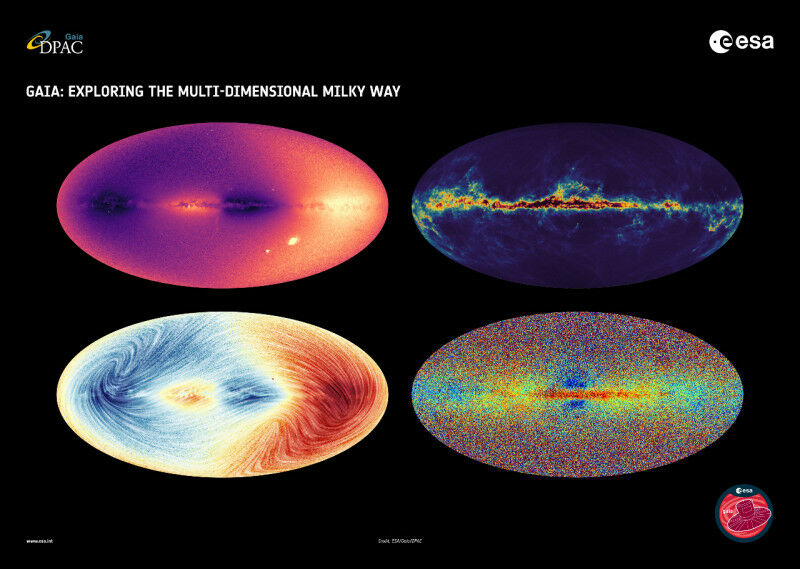 The ESA Gaia mission has released its new treasure trove of data about our home galaxy. Astronomers - including Professor Conny Aerts from KU Leuven - describe strange ’starquakes’, stellar DNA, asymmetric motions and other fascinating insights in this most detailed Milky Way survey to date.

Gaia is ESA’s mission to create the most accurate and complete multi-dimensional map of the Milky Way. This allows astronomers to reconstruct our home galaxy’s structure and past evolution over billions of years, and to better understand the lifecycle of stars and our place in the Universe.

Gaia’s data release 3 contains new and improved details for almost two billion stars in our galaxy. The catalogue includes new information including chemical compositions, stellar temperatures, colours, masses, ages, and the speed at which stars move towards or away from us (radial velocity). Much of this information was revealed by the newly released spectroscopy data, a technique in which the starlight is split into its constituent colours (like a rainbow). The data also includes special subsets of stars, like those that change brightness over time.

Also new in this data set is the largest catalogue yet of binary stars, thousands of Solar System objects such as asteroids and moons of planets, and millions of galaxies and quasars outside the Milky Way.

One of the most surprising discoveries coming out of the new data is that Gaia is able to detect starquakes - tiny motions on the surface of a star - that change the shapes of stars, something the observatory was not originally built for.

Previously, Gaia already found radial oscillations that cause stars to swell and shrink periodically, while keeping their spherical shape. But Gaia has now also spotted other vibrations that are more like large-scale tsunamis. These nonradial oscillations change the global shape of a star and are therefore harder to detect.

Gaia found strong nonradial starquakes in thousands of stars. Gaia also revealed such vibrations in stars that have seldomly been seen before. These stars should not have any quakes according to the current theory, while Gaia did detect them at their surface.

Professor Conny Aerts (KU Leuven), who is a member of the Gaia collaboration: "Starquakes teach us a lot about stars, notably their internal workings. Gaia is opening a goldmine for ’asteroseismology’ of massive stars."

The DNA of stars

What stars are made of can tell us about their birthplace and their journey afterwards, and therefore about the history of the Milky Way. With today’s data release, Gaia is revealing the largest chemical map of the galaxy coupled to 3D motions, from our solar neighbourhood to smaller galaxies surrounding ours.

Some stars contain more ’heavy metals’ than others. During the Big Bang, only light elements were formed (hydrogen and helium). All other heavier elements - called metals by astronomers - are built inside stars. When stars die, they release these metals into the gas and dust between the stars called the interstellar medium, out of which new stars form. Active star formation and death will lead to an environment that is richer in metals. Therefore, a star’s chemical composition is a bit like its DNA, giving us crucial information about its origin.

With Gaia, we see that some stars in our galaxy are made of primordial material, while others like our Sun are made of matter enriched by previous generations of stars. Stars that are closer to the centre and plane of our galaxy are richer in metals than stars at larger distances. Gaia also identified stars that originally came from different galaxies than our own, based on their chemical composition.

"Our galaxy is a beautiful melting pot of stars," says Alejandra Recio-Blanco of the Observatoire de la Côte d’Azur in France, who is a member of the Gaia collaboration.

"This diversity is extremely important because it tells us the story of our galaxy’s formation. It reveals the processes of migration within our galaxy and accretion from external galaxies. It also clearly shows that our Sun, and we, all belong to an ever-changing system, formed thanks to the assembly of stars and gas of different origins."

Other papers that are published today reflect the breadth and depth of Gaia’s discovery potential. A new binary star catalogue presents the mass and evolution of more than 800 thousand binary systems, while a new asteroid survey comprising 156 thousand rocky bodies is digging deeper into the origin of our Solar System. Gaia is also revealing information about 10 million variable stars, mysterious macro-molecules between stars, as well as quasars and galaxies beyond our own cosmic neighbourhood.

"Unlike other missions that target specific objects, Gaia is a survey mission. This means that while surveying the entire sky with billions of stars multiple times, Gaia is bound to make discoveries that other more dedicated missions would miss. This is one of its strengths, and we can’t wait for the astronomy community to dive into our new data to find out even more about our galaxy and its surroundings than we could’ve imagined," says Timo Prusti, Project Scientist for Gaia at ESA.

Gaia is ESA’s mission to create the most accurate and complete multi-dimensional map of the Milky Way. This allows astronomers to reconstruct our home galaxy’s structure and past evolution over billions of years, and to better understand the lifecycle of stars and our place in the Universe.