Difference Day 2022: ULB and VUB honour defenders of press freedom in the context of war in Ukraine

Monday, May 2, 2022 — On the occasion of International Press Freedom Day on 3 May, the Vrije Universiteit Brussel and the Université libre de Bruxelles present the annual Honorary Title for Freedom of Expression. With the war in Ukraine in the foreground, this Difference Day recognition is awarded to the Belarusian Association for Journalists (BAJ) and The Fix. For 26 years, the BAJ has been fighting for the rights of Belarusian journalists and independent media threatened and persecuted by President Lukashenko’s autocratic regime. The Fix is an international organisation by and for journalists, which since the beginning of the war in Ukraine has been at the foundation of a consortium providing assistance to fellow journalists in Ukraine.

The two organisations receive the award for their courageous and crucial contribution to freedom of thought, writing and expression. With the award, presented on 2 May at the European Gala Award Ceremony for Freedom of Expression held at Bozar, VUB and ULB are drawing attention to journalism in a war zone such as Ukraine and the fight for press freedom in the surrounding autocratic and dictatorial regimes, such as Belarus.

The ceremony is within the framework of Difference Day, the annual event held around 3 May by VUB and ULB, in which the two universities reiterate the importance of press freedom and the free expression of opinion, and call attention to the frequently dangerous work of journalists. Difference Day 2022 runs from 2 to 5 May.

Also at the award ceremony is Russia’s most famous cartoonist, Victoria Lomasko. She fled to Brussels in March with the help of Clin d’Oeil Films, a production house that makes documentaries about female cartoonists. A few weeks ago she started work on a four-part mural on large panels - 3m high and 7m20 wide - at GC Nekkerdal in Laeken. The work will be inaugurated at the gala evening and will then move in turn to the campuses of VUB, ULB and EhB. Lomasko fled her country to escape the dictatorship and the censorship imposed on her. But in Belgium she is experiencing new difficulties as a result of the Russia boycott imposed by Western Europe. Giving a platform to Russian voices today is a delicate but necessary matter.

Two honorary doctorates were also announced during the award ceremony. Dmitry Muratov, a journalist with Russian newspaper Novaya Gazeta, and Maria Ressa, a Filipino journalist and Nobel Peace Prize winner in 2021, accepted the title of Doctor Honoris Causa on 2 May. They will travel to Brussels at a later date to receive the title.

The Fix The Fix has deep roots in Ukraine. Co-founder Daryna Shevchenko is CEO of the Kyiv Independent, and she currently lives in the capital. A second co-founder, Jakub Parusinski, is the former CEO of the Kyiv Post. Editor-in-chief Zakhar Protsiuk is Ukrainian, as are several staff and team members.

At the beginning of the invasion, The Fix immediately mobilised all possible resources to support their colleagues in the Ukrainian media. They do this through a coalition of organisations, including the Dutch media NGO Are We Europe, Jnomics and the Ukrainian NGO Media Development Foundation, with the support of volunteers and a wide range of publishers and a growing list of Ukrainian media, including Ukrayinska Pravda, Zaborona, Detector Media, Liga.net, Ukrainer, Hromadske and Slidstvo. Support is allocated in the first place based on the urgency of the needs, and is then distributed proportionally. Thanks to the Media Development Foundation’s extensive network in regional and local media, The Fix is in contact with 100 publications throughout the country. Using a simplified procedure, smaller but immediate support is provided where and when it is most needed. They have so far been able to raise €2.3 million for general support of Ukraine’s media sector, through GoFundMe and directly, and independently donated more than €1.8 million to the Kyiv Independent, with whom they work closely.

Jakub Parusinski: "This is a lot of money and we treat the contributions with the utmost respect. We are acting prudently, but urgently: in war situations, crucial decisions have to be made within hours, sometimes minutes. The money is going out as fast as it is coming in. Our main goal is first to help save lives, and then to protect Ukraine’s independent and ethical media - an important part of Ukraine’s social fabric at this terrible time. The Ukrainian media is working around the clock to provide objective information, while at the same time facing extreme logistical and operational challenges: moving non-essential personnel out of active combat zones, organising essential supplies, and dealing with attacks on physical and technical infrastructure."

The Belarusian Association for Journalists (BAJ) The BAJ is one of the most important NGOs in Belarus. It was founded in 1995, a year after Lukashenko came to power. It is a non-partisan association of media workers, dedicated to freedom of expression and independent journalistic ideas in Belarus. This is not an obvious activity under Lukashenko’s dictatorial regime. Independent media organisations and journalists in Belarus have faced increased state repression since the 2020 presidential elections. The BAJ documented more than 500 detentions, hundreds of arrests and fines, and dozens of criminal cases and prison sentences against reporters, editors and media managers. Many have been forced to stop publishing or flee the country to work in exile. The authorities also launched a repressive campaign against the BAJ.

For example, on 16 February 2021, security forces raided the BAJ offices and the homes of members. Searches were also conducted throughout the country at the homes of human rights defenders, journalists and activists. In late August, the Supreme Court upheld the Justice Ministry’s demand and the BAJ was dissolved. Since then, the BAJ has operated from Lithuania.

Consult the full programme or ask questions about the programme by email. A summary of the highlights is attached.

Vrije Universiteit Brussel is an internationally oriented university in Brussels, the heart of Europe. By providing excellent research and education on a human scale, VUB wants to make an active and committed contribution to a better society.

The World Needs You The Vrije Universiteit Brussel assumes its scientific and social responsibility with love and decisiveness. That’s why VUB launched the platform De Wereld Heeft Je Nodig - The World Needs You, which brings together ideas, actions and projects based on six Ps. The first P stands for People , because that’s what it-s all about: giving people equal opportunities, prosperity, welfare, respect. Peace is about fighting injustice, big and small, in the world. Prosperity combats poverty and inequality. Planet stands for actions on biodiversity, climate, air quality, animal rights... With Partnership , VUB is looking for joint actions to make the world a better place. The sixth and last P is for Poincaré , the French philosopher Henri Poincaré, from whom VUB derives its motto that thinking should submit to nothing except the facts themselves. VUB is an -urban engaged university-, strongly anchored in Brussels and Europe and working according to the principles of free research.

News diversity in Flanders has decreased due to media concentration - 03.06.2021 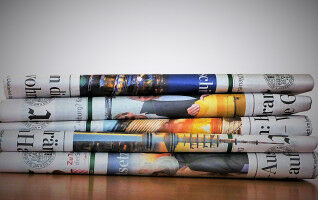