Left: different cell types based on which genes are active / Right: location of these cells in the brain of an octopus. © KU Leuven | Seuntjens Lab

For the first time, researchers are mapping the different cell types found in octopus brains. Because of these animals’ amazing ability to think, it should come as no surprise that their brain cells exhibit similar properties to the known neurons and glia in other animals. What is surprising, however, is the large number of different types of brain cells. This diversity may explain why octopuses - although evolutionarily some 600 million years removed from us - are still able to solve complex thinking exercises. The research results were published in Nature Communications.

Octopuses, with their eight arms, have something extraordinary. Especially since they are capable of performing complex tasks such as handling utensils, problem-solving thinking and fly-by-night camouflage that allows them to blend into their surroundings. This sets them apart from other invertebrates and makes them particularly intriguing. Although octopuses are evolutionarily some 600 million years away from us, research on their brains can teach us an awful lot about our own brain development, as well as about animals’ thinking abilities and how they perceive the world.

While it’s already known what octopus brains look like and are constructed of, we don’t yet know what types of cells they contain and how they contribute to the animals’ astonishing ability to think and learn. The research team of KU Leuven professor Eve Seuntjens is now changing that. They examined which cell types are present in the brains of octopuses and literally made a map of them showing what types of brain cells are there and where they occur. The team did this by single-cell RNA sequencing, looking in each cell of the brain separately to see which genes are formed. They then compared this to the genes active in the brain cells of fruit flies and mice. 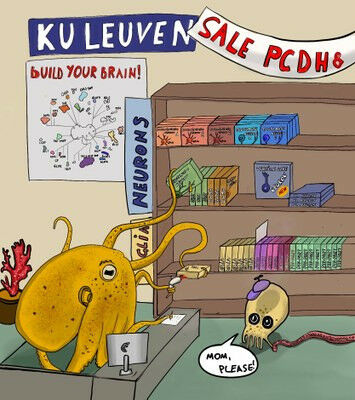 It is no big surprise that octopus brain cells exhibit characteristics of typical neurons and glia as we know them in fruit flies and mice. PhD researcher Ruth Styfhals explains: "What does surprise is the large number of different types of brain cells. What makes our cerebral cortex large is not so much the number of different cell types but the large number of cells per type. In octopuses it is the opposite: their bulky brain has a greater diversity of relatively rare cells."

The world through an octopus lens

"Similarities have already been demonstrated by our research group between the migration of human brain cells and those of octopuses at an early stage of development , but this study nevertheless points to a different organization and complexity once the brain continues to develop, Professor Seuntjens said. "We suspect that the diversity of brain cell types in octopuses is partly responsible for their enormous ability to think. In the future, further research could teach us which brain circuits are formed, what function they perform and consequently how octopuses perceive the world."