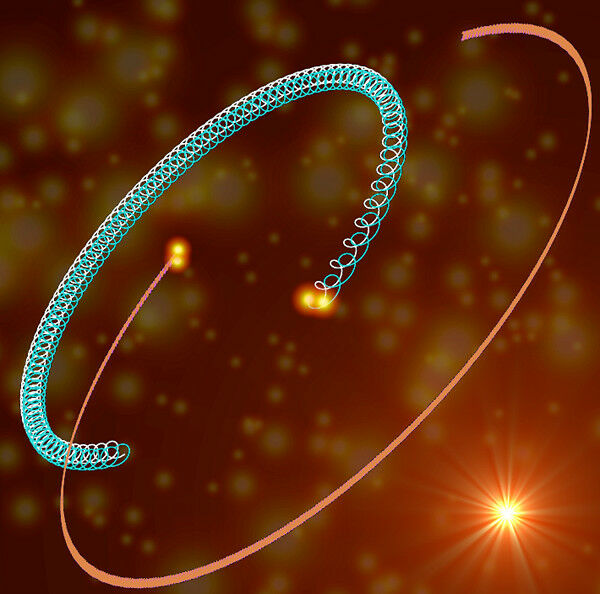 A system composed of four gravitationally bound stars has been followed by spectroscopy for several years by a team of researchers. This quadruple system is unstable and simulations of its future evolution show that, eventually, the stars may collide, which is likely to produce a thermonuclear supernova. The evolution of such stellar quadruple systems thus represents a new way to explain the observations of supernovae.

In 2017, Thibault MERLE - Research Unit in Astronomy and Astrophysics, Faculty of Sciences of the Free University of Brussels - discovered a spectroscopic quadruple (HD 74438), i.e. a system of four stars, in the Gaia-ESO survey. The Gaia-ESO survey is a public spectroscopic survey that provides a detailed overview of the stellar content of the Milky Way by characterizing more than 100 000 stars. He was then able to track this system with high-resolution spectrographs at the University of Canterbury’s Mount John Observatory in New Zealand and the Southern African Large Telescope in South Africa. These observations have determined that this system is composed of 4 gravitationally bound stars: a short-period binary orbiting another short-period binary on a longer orbital period (2+2 configuration). Its belonging to the open cluster IC 2391 makes it the youngest spectroscopic quadruple system discovered so far (43 Ma million years) and among the quadruple systems with the shortest external orbital period (6 years).

Thanks to the spectroscopic analysis, it was possible to show that this quadruple system undergoes dynamical effects on long time scales compared to the orbital periods. Indeed, one of the inner binaries should evolve on a circular orbit while it has an eccentric orbit. This is explained by the gravitational effect of the distant binary companion which can increase the eccentricity.

State-of-the-art simulations of the future evolution of this system show that these gravitational dynamics can lead to one or more collisions and mergers producing white dwarfs whose mass is just below the Chandrasekhar limit. A star like our Sun will end its life as a white dwarf, and the mass of white dwarfs cannot exceed the so-called Chandrasekhar limit. If it does, as a result of mass transfer or fusion, it collapses and produces a thermonuclear supernova. It is interesting to note that it is now suspected that 70-85% of all thermonuclear supernovae result from the explosion of white dwarfs with masses below the Chandrasekhar limit. The evolution of stellar quadruples such as HD 74438 represents a promising new path for their formation.

ERC has awarded a Synergy Grant to astrophysicist Conny Aerts - 25.10
VUB and ULB immerse high school students in the world of space travel - 20.10
RHEA Luxembourg leads international partnership with ESA on QKD - 26.09
This site uses cookies and analysis tools to improve the usability of the site. More information. |