Politics - History / Archeology - 23.04.2021
Immigrants participated in the political life of medieval England
VUB research shows many people came from the Low Countries and were politically active Friday, April 23, 2021 — The question as to what extent newcomers from abroad should have a political say in their new place of residence is one that occupies many minds.
Law - History / Archeology - 01.02.2021
VUB rediscovers Belgian contribution to peace
In his doctoral research, VUB legal historian Wouter De Rycke investigated the unique but forgotten contribution of the Mons lawyer Louis Bara (1821-1857) to the 19th-century international peace campaign. According to De Rycke, his research offers a glimpse into a rather unknown episode of our history: " In the 19th century, the first internationally organised movement to declare war emerged, a kind of 'NGO' avant la lettre.
History / Archeology - Earth Sciences - 05.05.2020

Lost silk road city located by Ghent University researcher
A researcher at Ghent University has identified a lost Silk Road city larger than medieval Ghent, London or Venice. Historians and archaeologists have been searching for nearly 200 years for the city of Magas, capital of the ninth to twelfth century kingdom of Alania. This Kingdom, located in the North Caucasus mountains of modern Russia, controlled a critical section of the Silk Roads: a trade route which connected East Asia and the Mediterranean centuries before the era of European expansion.
History / Archeology - Chemistry - 09.02.2020

People from Ghent University and Van Eyck: art sciences and social history
In Ghent, it's all about Van Eyck and the Ghent Altarpiece in 2020. One of the highlights is undoubtedly the return of the restored painting to St. Bavo's cathedral.
Computer Science - History / Archeology - 02.10.2019
Deepest layers of Bruegel drawings
On the occasion of the 450th anniversary of Pieter Bruegel the Elder's death, the city of Brussels is organising an exhibition on a few of the master's original drawings as well as a unique series of prints based on these drawings.
History / Archeology - 20.05.2019
Facial reconstruction breathes new life into ancient citizens of Sagalassos
A look into the past. It's usually just a metaphor, but archaeologists Jeroen Poblome and Sam Cleymans have made it a physical reality. Together with the University of Burdur, Turkey, they have reconstructed the faces of two centuries-old residents of Sagalassos. For over thirty years, KU Leuven researchers have been examining the archaeological site of Sagalassos with an international and interdisciplinary team.
History / Archeology - Life Sciences - 20.06.2018 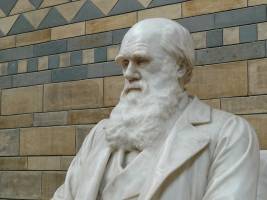 Artificial intelligence reveals authors of anonymous 19th-century texts on evolution
Some anonymously published papers on evolution far predate the publication of Charles Darwin's Origin of Species (1859). With the help of modern AI software, Koen Tanghe (UGent) and Mike Kestemont (UAntwerpen) have revealed the authors of two of these papers. This work may help to foster interest in those early, intriguing publications on evolution, their authors and their possible influence on Charles Darwin.
Earth Sciences - History / Archeology - 06.02.2018
Giant earthquakes: not as random as thought
Scientists discovered that giant earthquakes reoccur with relatively regular intervals. When also taking into account smaller earthquakes, the repeat interval becomes increasingly more irregular to a level where earthquakes happen randomly in time. In their recent paper in Earth and Planetary Science Letters , Moernaut`s team of Belgian, Chilean and Swiss researchers presented a new approach to tackle the problem of large earthquake recurrence.
Life Sciences - History / Archeology - 19.06.2017
Ancient DNA reveals role of Near East and Egypt in cat domestication
DNA found at archaeological sites reveals that the origins of our domestic cat are in the Near East and ancient Egypt. Cats were domesticated by the first farmers some 10,000 years ago. They later spread across Europe and other parts of the world via trade hub Egypt. The DNA analysis also revealed that most of these ancient cats had stripes: spotted cats were uncommon until the Middle Ages.