Successful and unsuccessful approaches to the pandemic by Western governments

Tuesday, May 17, 2022 — Since 2020, the world has been experiencing the consequences of the Covid-19 pandemic. The cause is obviously a virus, but the degree of its spread, and the associated number of infections and deaths, is largely dependent on socio-economic factors. The course of the pandemic therefore varies greatly from country to country. Research has already shown that the nature of a country’s response - elimination, mitigation, re-immunity, etc - is strongly determined by political and ideological factors. These factors have been decisive in a country’s success in fighting the pandemic.

A new book by VUB professor of socio-economic ethics Koen Byttebier is one of the first studies to thoroughly examine these socio-economic factors. In Covid-19 and Capitalism: Success and Failure of the Legal Methods for Dealing with a Pandemic , he argues that many countries failed, in both prevention of and the response to Covid-19.

The book focuses on the situation in the US, the UK and the EU member states. In 11 chapters, Byttebier explores in detail the most important socio-economic factors, discussing the causes of Covid-19 and the policy and political response to it, including the reaction of monetary institutions such as central banks and the IMF. Byttebier further examines the impact of the pandemic on fiscal policy, healthcare, residential care, the labour market, education, the development of vaccines and medication, and socio-economic inequality.

Byttebier: "In my book, I come to the conclusion that the failure to act adequately against the spread of the Covid-19 virus is largely due to neoliberal policy. An initial attitude of neoliberal governments in various countries of the world, for example, was one of non-reaction, as a result of which, in the period that elapsed between the WHO sounding the alarm and Western governments finally being prepared to take action, much valuable time was lost - some even talk about ’the lost six weeks’. Another is the absolute primacy of the economic interests promoted by economic neoliberalism, even at the expense of public health. As a result, many governments have been unwilling to take measures quickly or to maintain them for long enough, resulting in the constant upward and downward curves of infections and death rates. Another factor has been that countries that had been most exposed to neoliberal austerity policies in the run-up to the Covid-19 pandemic were also the worst prepared for an outbreak of such a virus. Problematic issues in this respect were, for example, the understaffing of hospitals and nursing homes, the lack of protective equipment and the production capacity to manufacture it, among many other examples."

The book concludes with recommendations that could increase the resilience of societies against such pandemics.

Vrije Universiteit Brussel is an internationally oriented university in Brussels, the heart of Europe. By providing excellent research and education on a human scale, VUB wants to make an active and committed contribution to a better society.

The World Needs You The Vrije Universiteit Brussel assumes its scientific and social responsibility with love and decisiveness. That’s why VUB launched the platform De Wereld Heeft Je Nodig - The World Needs You, which brings together ideas, actions and projects based on six Ps. The first P stands for People , because that’s what it’s all about: giving people equal opportunities, prosperity, welfare, respect. Peace is about fighting injustice, big and small, in the world. Prosperity combats poverty and inequality. Planet stands for actions on biodiversity, climate, air quality, animal rights... With Partnership , VUB is looking for joint actions to make the world a better place. The sixth and last P is for Poincaré , the French philosopher Henri Poincaré, from whom VUB derives its motto that thinking should submit to nothing except the facts themselves. VUB is an ’urban engaged university’, strongly anchored in Brussels and Europe and working according to the principles of free research. 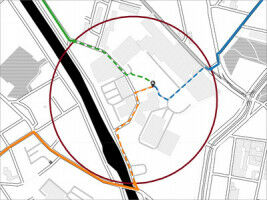